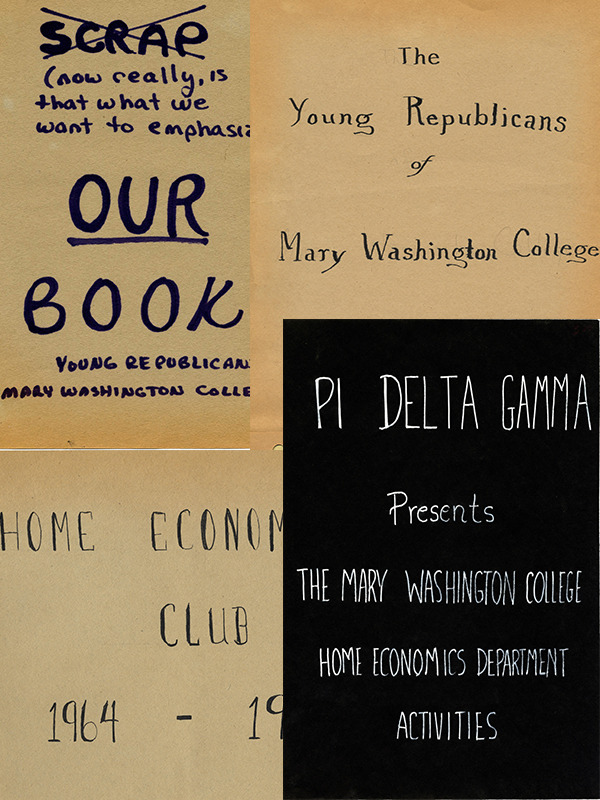 The nineteen-sixties were a decade of change for the United States and Mary Washington College. From 1960 to about 1964 the scrapbook from the Pi Delta Gamma Home Economics Honorary Society displays the domestic values popular in nineteen-fifties America. During this time, the Home Economics Department focused on educating the next generation of caregivers and consumers. Many popular images include women performing skills like cooking, dressmaking, and nursing. However, in 1964 after much heated debate, a faculty curriculum committee voted to discontinue Home Economics as a major at Mary Washington and offer such classes for elective credit only.[1] This decision dissolved the Home Economics honorary society and re-designated the organization as a club. Their next scrapbook spans from 1964 to 1967. There are no post- 1967 Home Economics scrapbooks in the Simpson Library archives, which testify to the club’s quiet fade on campus.

Explore whole scrapbooks in the Collections, or individual pages through Items, both under the Browse tab on the Navigation Bar. Learn about the surrounding culture and events of the nineteen-sixties on the Context page, and see Mary Washington events set against this context in the Timeline. To learn more about the process of this project and more resourced we were not able to include, visit the About and More pages.